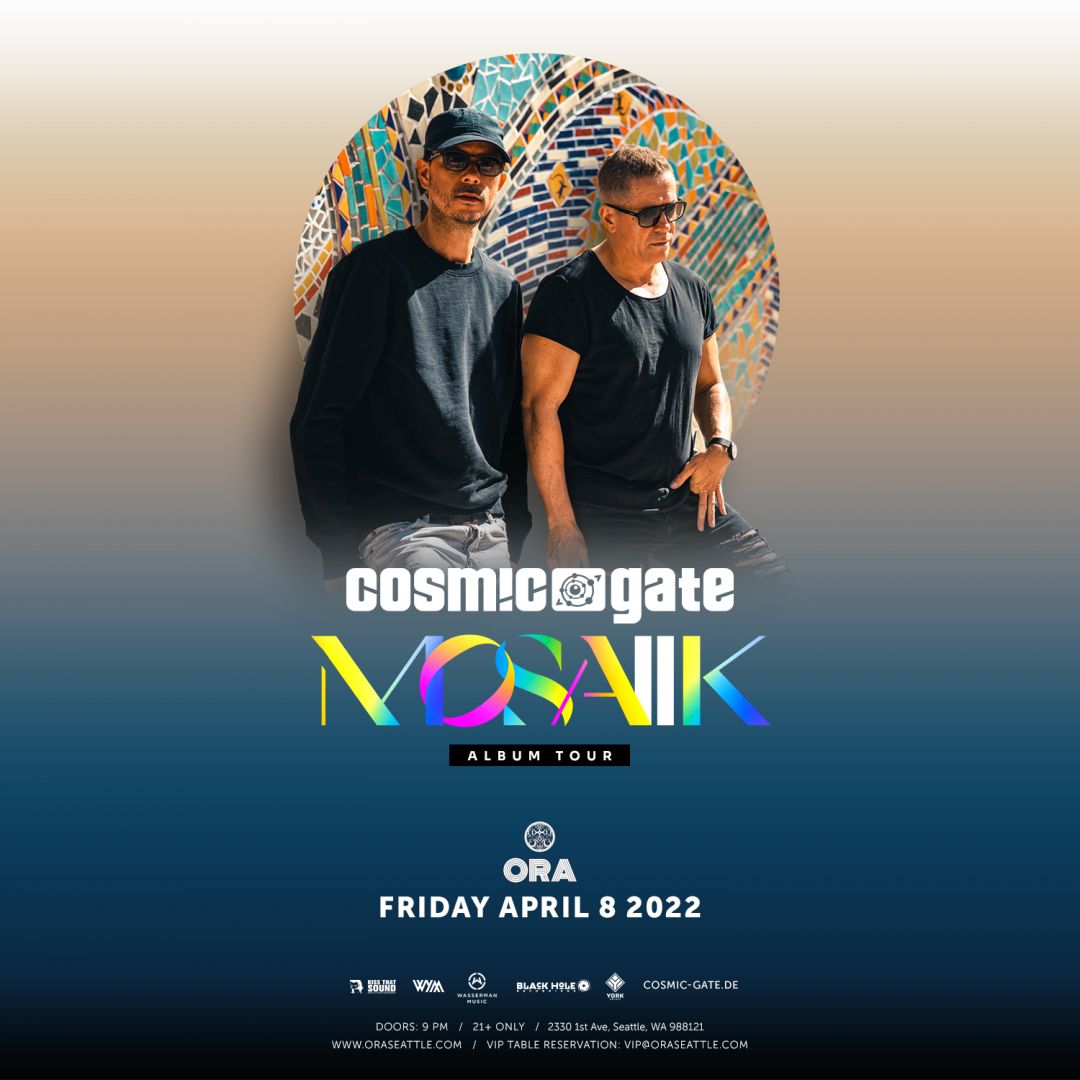 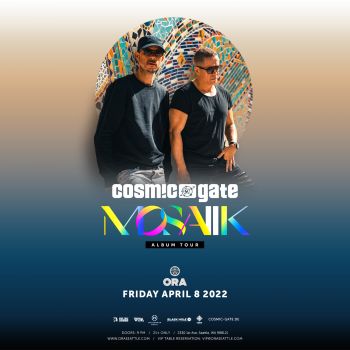 From their very first drumbeat, throughto the release of ‘[Forward Ever Backward Never]’ - their‘20 Years’ commemoratinglongplayer,Cosmic Gate’s Nic Chagall and Bossi have proved to be a matchlessmusical union. Achance encounter in aCologne recording studio two decades agoset themon the course to becoming Germany’s most enduringly successfulelectronic music duo.Their original productions have takenthem to thehighest reaches of streaming lists and download charts, whilst their remixography eclectically includes everyone from revered Hollywood composers like James Horner (Avatar/Titanic) to in-scene demigods like Armin van Buuren and Tiësto.Nic&Bossi’s behind-decks-brotherhoodhastriggeredcritical mass in a now uncountable number of countries.

They’ve dominated electronic music capitals andspun at the veritable A-through-Z of major festivals. In the process they’vepicked up a Grammy nomination (in 2019’s Best Remix category), become the highest climber on DJ Mag’s Top 100 chart and racked up numerous other awards &nominationsalong the way. Driven by their critically applauded albums, Spotify-busting singles like ‘am2pm’, ‘Fall Into You’ and ‘Falling Back’ (each with 5million streams to their name)and scene-defining classics like‘Be Your Sound’, ‘Fire Wire’ and ‘Exploration of Space’ (10million Spotify streams),their star on dance music’s walk of fame has long since been laid.

As DJs, kinetically bouncing off the others energy, week in, week out, Cosmic Gate continue to push floorsto supernova. In North America they’ve smashed the biggest festivals like EDC, Ultra, Electric Zoo, IleSoniq, Spring Awakening, Paradiso, Global Dance, Veld, Dreamstateand more.Road-blocking clubs and events like Space (both Miami & New York), Governors Island NY, LA’s Palladium and the Great Hall at Brooklyn’s Avant Gardnerhas become their SOP.Floors have felt similar pressurein hotspots worldwide.Among them have beenTomorrowlands inBelgium & Brazil,ASOTs internationally,Creamfields, Ministry& SW4 in the UK&Ultra Europe, Untold Romania, Mysteryland&Luminosity in Holland andParookaville, Boothaus&Nature One in their native Germany. Their WMC/MMW Miami Sunset Cruises have long since passed intoclubbinglegend and the pair famouslysold out a 2000 capacity solo show on the island of Honolulu.

Grammy nomination: the final month of 2018 Nic&Bossi were nominated for their first Grammy award. Selected in the Best Remixer category, their work on Gabriel & Dresden and Sub Teal’s ‘Only Road’from a year earlier drew nomination praise from the academy. The remix was further described by DJ Mag as “masterful”, with “alchemic sequencing”, “shrewd use of context” and was “wily” in its “sound design”

Albums have, and continue to play a substantial part in their production career. Most recently that’s been evidenced by‘20 Years’, which was released in August of 2019. Significantly subtitled ’[Forward Ever Backward Never’], it was conceived as an album thatinnovatively took their body of work to new floors and audiences. Includingnew Cosmic Gate productions, it also incorporated 2.0 renovations of CG anthems. Further it featured reworks of tunes personally inspirational to CG, as well as new takes from other artists on classic Cosmic moments. Its first single releases brought a brace of Beatport hits with the MINT-playlisted ‘Come With Me’ and the “profound” (said DJ Mag) “9/10” ranked ‘Need To Be Loved’ both hitting the #1 position.

The album also gave rise to the 20 Years live tour, which to date has reached 30 cities globally.Of the tour’s LA stop, EDM.com said: “Los Angeles played host to one of their biggest shows on the tourwhere they performed at the legendary Hollywood Palladium. Their extended three-hour set included guest performances by JES, Eric Lumiere, and Emma Hewitt, who have lent their vocals to some of the duo's biggest tracks”. The Dallas Observer meanwhile hailed their Stereo Live, Houston show as a “cruise through two decades of varied, quality productions.

’20 Years’ was preceded by the two ‘Chapters’ of thelongplayer‘Materia’ - the release of which musically bookended the group’s 2017. It was the album mothership for a clutch of new Cosmic Gate singlesand releases. Among them were‘Fall Into You’,‘Edge Of Life’, ‘Noom’, the Beatport #1 ‘am2pm’, ‘AR’,‘Dynamic’ (“melody and grit in equal proportions” said DJ Mag’s 8/10 review) and others.Following their ‘Start To Feel’ long-player (more info below), the releasescored a MIXMAG Album of the Month plaudit, representing - said the magazine - an “impressive”, “roots-return” to their origin sound. Upon their release the ‘Materias’were met with comparable sales success, hitting iTunes’ top 10s in 9 countries and reaching the #2 spot in both the United States and Canada.

The period 2015 - 2016 saw Cosmic Gate continue to embrace the collaboration medium through a number of high-profiles co-production projects. Among them was ‘Embargo’, which was the result of studio time shared with Armin van Buuren. The track was subsequently featured on the latter’s 2015 album, ‘Embrace’. A year later Nic&Bossi teamed up with Ferry Corsten to record ‘Event Horizon’. Garnering substantial praise from fans, DJs and press alike, it topped Beatport’s Trance chart in October of 2016.

Released in the summer of 2014, Cosmic Gate used their sixth album ‘Start To Feel’ to inspire fans to experience electronic music in a “deeper, wider, more complete way”. It’s first single - the Eric Lumiere-sung ‘Falling Back’ – was described as “9.5/10” scoring “anthem in a can” by the UK’s DJ Mag. Further singles including ‘So Get Up’, Yai (Here We Go Again’)and ‘Fair Game’ cemented its reputation. Upon release, the album hit the iTunes’ top 10 in the US, Canada, Germany and Russia. A MIXMAG 9/10 rated release, ‘Start To Feel’was hailed as “audio chemistry and production physics in their most quantum forms”. It also catalysedthe Start To Feel bus tour, which famously saw Nic&Bossi perform 13 shows in just 16 days, coast-to-coast across North America, playing to over 20,000 fans.

In 2011 the duo released ‘Wake Your Mind’.It produced ‘Be Your Sound’ - a single that MIXMAG suggested “finally unseats ‘Fire Wire’ as Cosmic Gate’s best-known-for track”. With its official video just off 16 million views on YouTube, it bagged anIDMA nomination in 2012, (with the JES-sung‘Flying Blind’ following suit a year later).

Cosmic Gate’s album movements began with ‘Rythm& Drums’ (in 2001), ‘No More Sleep’ which followed a year later and‘Earth Mover’ in ‘06. The latter was the album platform for the club hits ‘Analog Feel', ‘Should Have Known’ and the IDMA-nominated ‘I Feel Wonderful’. ‘Sign of the Times’ arrived 3 years later, bringing the vocal anthem ‘Body of Conflict’, a further IDMA-nod for‘Not Enough Time’ and spurred(a then near unheard of) 43-place leap up DJ Mag’s Top 100 chart. It also edged the pair towards a more open-plan electronic music style (later to fully manifest in ‘Wake Your Mind’ and ‘Start To Feel’).

Cosmic Gate’sWake Your Mind marque was subsequently spun off into a number of other areas. WYM Radio is a comprehensively formatted show, which featuresNic&Bossidiscussing and airing their most highly rated tracks of the week. It’ll also encompasses first-listen music premieres and tunes from the deeper side of the CG psyche. The show - which is broadcast on Sirius XM, DI.FM and many other stations - also features comprehensive info on up-and-coming gigs, Nic&Bossi’s Big Bang track of the week and a host of other features, latterly including the ThrowBack weekly classic and their Private Playlist tune. In January of 2019, the show passed its landmark 250th episode.

Since 2013, Wake Your Mind Records has been the label base for all of Cosmic Gate’s releases. It’s also served as a dais for Cosmic Gate to sign and release music from other artists. Of late, tracks from producers like Maor Levi Greenhaven DJs and Steve Brian, as well as Nic Chagall’s own solo material have featured, alongside co-productions with Ferry Corsten, Markus Schulz, Super8 & Tab and others. Latterly, the Wake Your Mind Sessions compilations have also come to play a part in the WYM make-up, with the third in the series reaching release in March of 2018.

Other remixes:Over their production lifetime, Cosmic Gate’s remixeshave become almost as illustrious as their productions. In essence a blow-by-blow of A-list artists, Nic&Bossi have lent their studio know-how to releases byArmin van Buuren, Tiësto, Deadmau5, Paul van Dyk, Above &Beyond’sOceanLab project, Markus Schulz, John O’Callaghan, Gareth Emery and Ferry Corsten. In early 2010 Atlantic Records US approached them to remix James Horner’s ‘I See You’ – the main theme from the film Avatar. This run culminated in Nic&Bossi being nominated for Best Remixer at the 2010 IDMAs and not to forget their Grammy nominated remix for „Gabriel & Dresden - The Only Road“ in 2019 (see extra paragraph on page one)