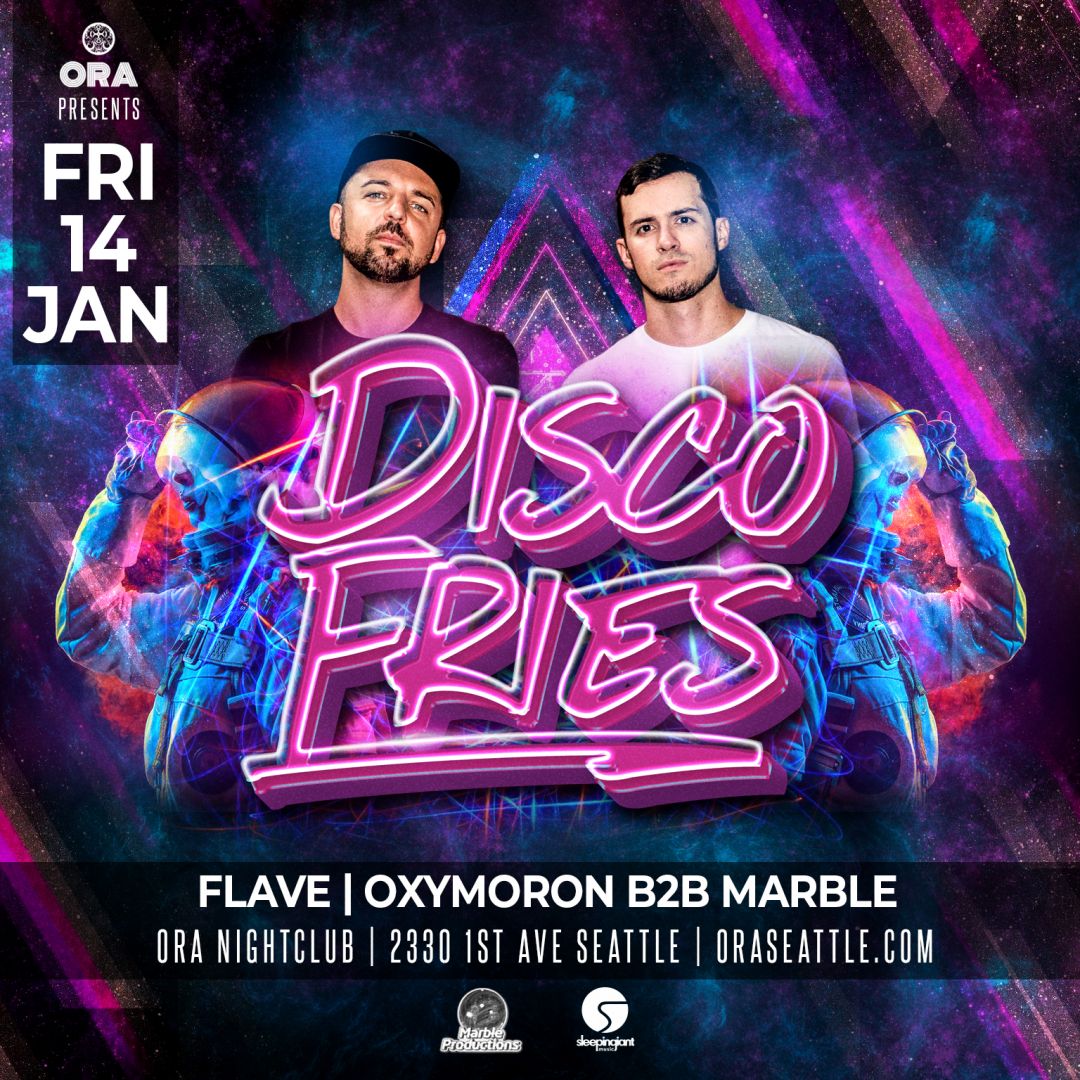 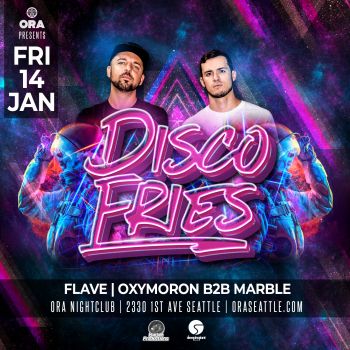 Videos
Event Details
Ora presents Disco Fries
Local Support:  Flavor- Oxymoron
B2B Marble
Date: Friday December 14- 2022
Time: 10pm-2am
-----------------------------
Disco Fries
------------------------------
American duo Disco Fries have become a staple in modern dance music by walking the sonic tightrope between mainstream and club-stream. From the dorm rooms at Berklee College of Music to the stage at EDC Las Vegas, Nick Ditri and Danny Boselovic have not only blurred genres with their signature blown-out basslines and classically driven melodies but have remained best friends throughout the journey. From the moment Nick and Danny looked at a plate of “Disco Fries” and realized they had just discovered their brand, their music has been championed by some of the biggest names in dance: from artists like Kaskade, Diplo, Steve Aoki, and Hardwell to popular media outlets such as Billboard, MTV, Rolling Stone and Dancing Astronaut.
No matter how large the support list grew, one artist in particular would change the course for the Disco Fries. That happened in 2013 at Electric Zoo, when the dance music icon; Tiesto, debuted “Lose It”. From that moment forward, Tiesto forged a working relationship with Nick and Danny that lead to multiple works. The first being their collaboration, “iTrance”, which was quickly followed by the Disco Fries’ first release on Tiesto’s record label, Musical Freedom, dubbed “Philtrum”. After witnessing how influential Musical Freedom Records was for not only them, but for many producers looking for an outlet to release music, Nick and Danny sought to provide a similar space by starting their own imprint, Liftoff Recordings. The label has encompassed a radio show, releases, and more in an effort to nurture up-and-coming talent.
As years progressed, the duo’s discography saw massive growth with production and writing credits on Krewella’s Live For The Night and Tiësto’s fifth studio album, A Town Called Paradise. The latter of which featured the smash single, “Wasted”, which went on to become TIESTO’s first certified Platinum single in the United States. The Disco Fries saw not only success in the dance world, but got a true taste for what real crossover music would look like moving forward.
With a rich history cementing them as trail blazers within the dance crossover community, the duo looked to the future and brought their magic back. Their debut EP, Autonomous, was released on Liftoff Recording to great success, and featured the iconic Halogen Mix of “Born Ready” ft. Hope Murphy topping over 11 MILLION STREAMS on SPOTIFY. The duo’s subsequent Liftoff Releases, Stars Come Out (with RUNAGROUND) and We Are One (ft. Kaaze and Danyka Nadeau), also gained traction on Spotify and have collectively been streamed over 10 million times to date. Their recent “DF EP” gained rotation on SiriusXM BPM and on FM stations nationwide, as their followup single “U Make Me” has hit Mediabase’s Dance Top 50 chart.
With nearly half a million monthly listeners on the popular streaming service Spotify and a radio show being heard in over 35 markets worldwide, the Fries are always looking to push themselves even further. "We're always looking to explore new sounds. We want to keep making music that we enjoy sharing with people that enjoy hearing it. The party never ends for us."
When & Where
Jan 14, 2022 at 10:00 PM to Jan 15, 2022 at 2:00 AM PST
Ora Nightclub
2330 1st Avenue
Seattle, WA 98121
Connect
...acebook.com/oraseattle
...tagram.com/oraseattle/
Re-send Order Confirmation
Click here to re-send your order confirmation email.