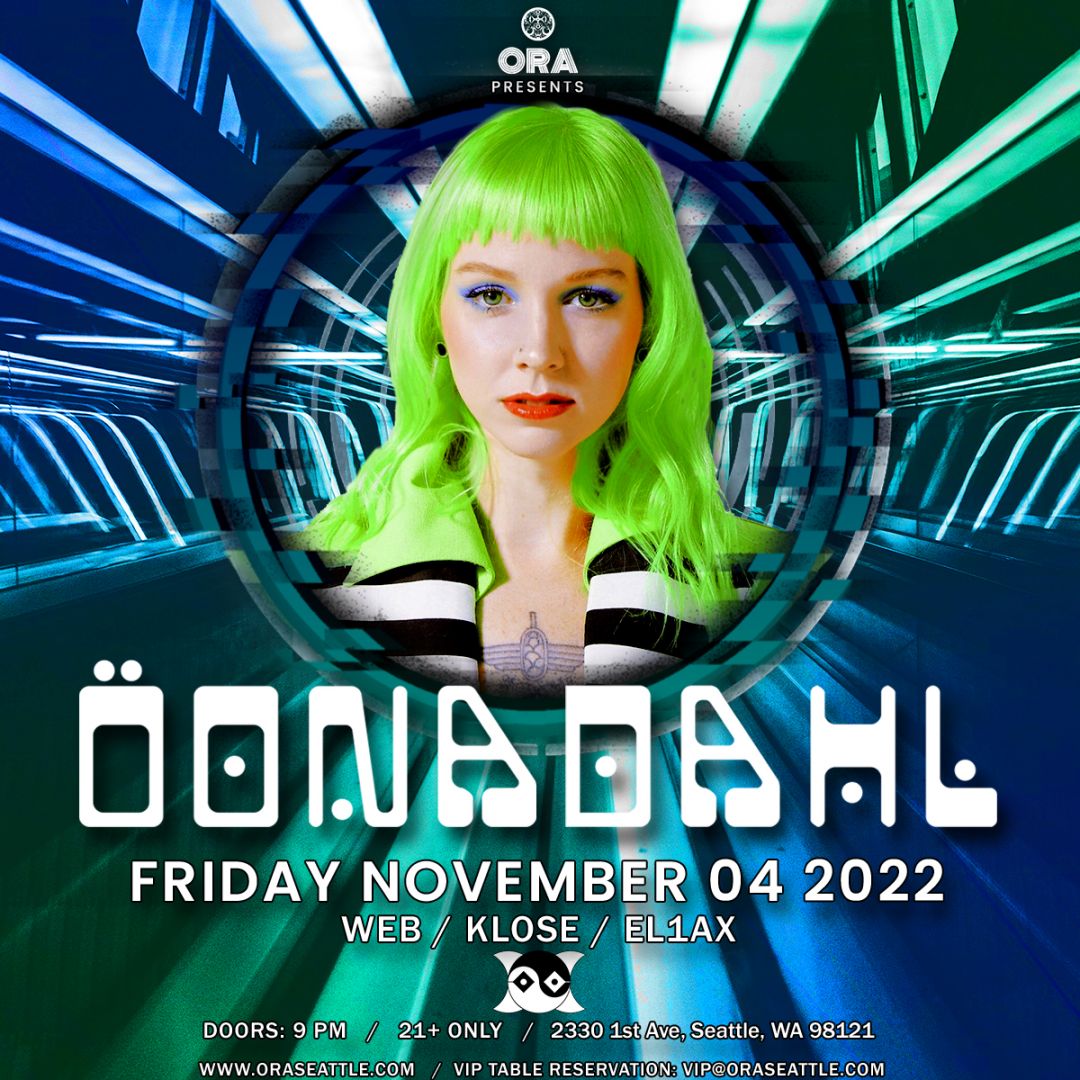 Nov 4, 2022 at 9:00 PM to Nov 5, 2022
Ora Nightclub, Seattle, WA
Get Tickets
Share
Event Summary
Ora Presents Öona Dahl ( Anjunadeep)  ( POSTPONED WILL ANNOUNCE A NEW DATE SOON )
Date: Friday November 4- 2022
Time: 9pm-2am
Local Support: WEB/KLOS/ EL1AX
Öona Dahl-----------------------------
----------------------------------------
As a young girl in upstate New York, Öona Dahl was fascinated with music and became obsessed with listening to old cassette tapes in her living room. This passion quickly evolved and before long she began making musical sketches in Acid Pro and Fruity Loops.
Wanting to experience electronic music on the dance floor, many excursions into the Toronto rave scene were made. Inspired by the DJ’s around her, she bought a pair of turntables and set about learning to mix records. Soon she was playing clubs, raves and warehouses at the age of 17. These formative years crystallized Öona’s love of underground dance music.
Öona moved to Florida in the early 00’s to spend her college years studying sound design and digital media as she immersed herself into the Florida underground. Bouncing between events in Orlando, Miami and Tampa she became a fixture in the scene and eventually met DJ Monk (Rabbit In The Moon) and DJ Three from Hallucination Recordings, forming a close bond which continues to this day.
By 2012, Öona’s music was getting into the hands of DJ’s and making waves on dance floors which would lead to her Let The Light In EP being released on Lee Burridge’s label All Day I Dream. Regular DJ bookings at the party series of the same name soon followed with Öona often being entrusted to play the closing set. She would go on to further explore this sound with two EP’s for Anjunadeep in 2018 and 2019.
Meanwhile, Öona was developing another side of her music that was both more experimental and song-based than her initial dance floor offerings. Exploring early influences like the ambient stylings of This Mortal Coil, Bjork’s electronica and Brian Eno’s soundscapes. Öona’s efforts caught the ear of DJ Three and before long she was signed to an album deal with his Hallucienda imprint. In 2017, the five-track Wait. lifted EP (including a music video for the title track) acted as a musical signpost threading the needle through leftfield house, electronica, and pop-infused ambience. Her debut artist album Holograma soon followed revealing a full body of work by an artist who had now found both her feet and, her voice across the full spectrum of electronic music.
Moving into 2021, Öona Dahl has since delivered a wave of new sounds. Her self-released Road to Awe EP on Bandcamp and the Godtripper EP on Watergate Records deliver deep, bouncing grooves with a subtle acid touch beneath her unique vocal textures. As Slumber, her collaboration with Amber Cox, their ability to balance darkness with the light is deftly explored on their XLR8R+ track ‘Fell Into A Dream’ and the Twin Moon EP via modern balearic house imprint Rumors.
‘Love Is All We Need’, her first collaboration with Kirsty Hawkshaw (the voice of iconic rave act Opus III) was released to both critical acclaim and dance floor cheers. Their original version is a glowing slice of electronica whilst Oona’s remix coyly hints at the past while looking towards the future. Kirsty’s signature vocals deliver the message creating a mood as pensive as it is uplifting.
In-between these releases and a heavy DJ schedule (pre-pandemic) Öona has been intensely working toward the arrival of her highly-anticipated sophomore album Morph on Hallucienda. Picking up where Holograma left off, Morph finds Oona delivering her most adventurous body of work yet, as her songwriting acumen expands from spectacular, vocal-led electronica into offerings of indie dance. All this while continuing to put her own indelible mark on leftfield house and techno including another stunning collaboration with Kirsty Hawkshaw on ‘Serenity’.
Photo Gallery 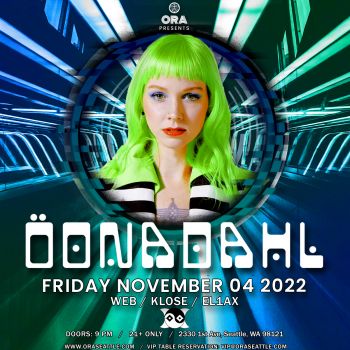