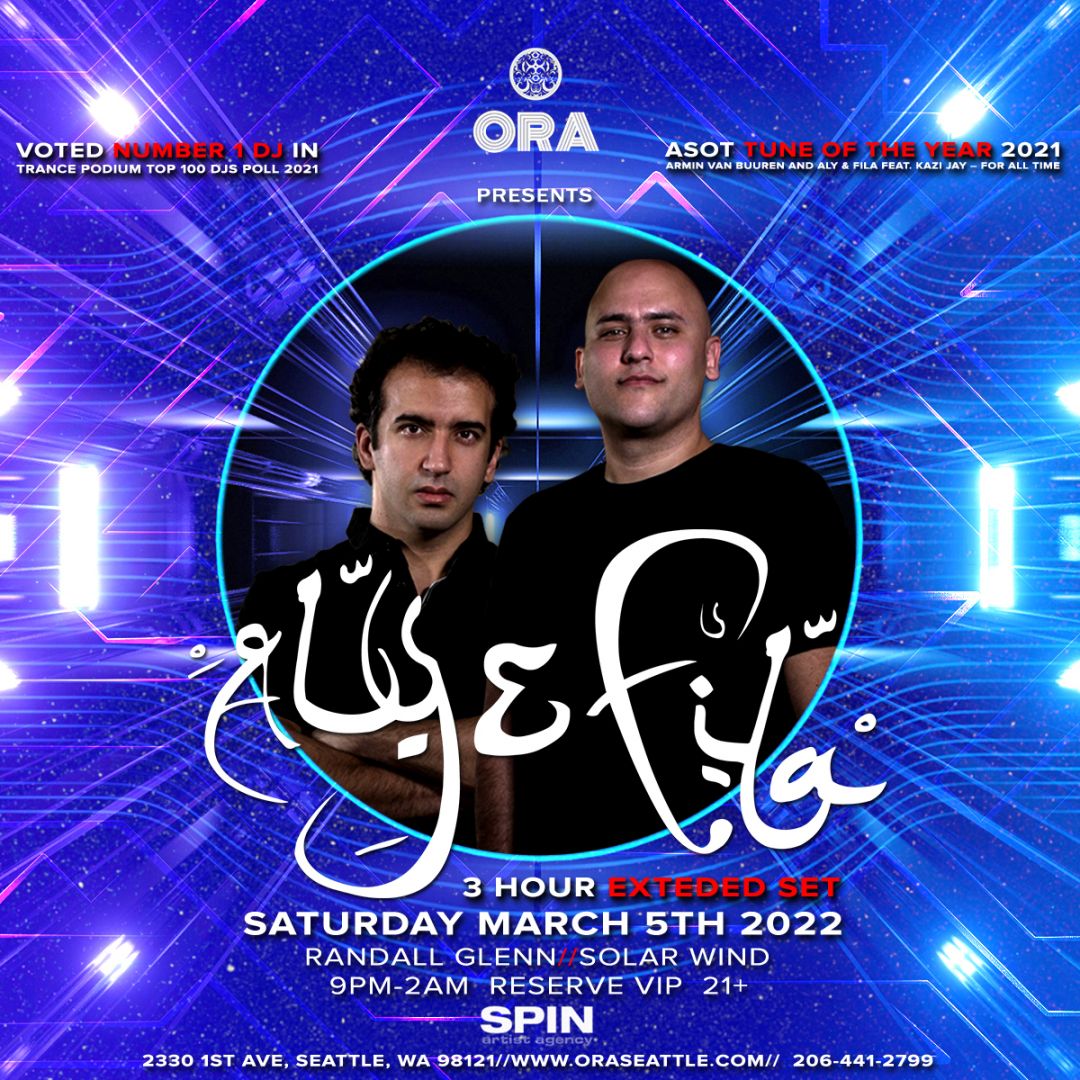 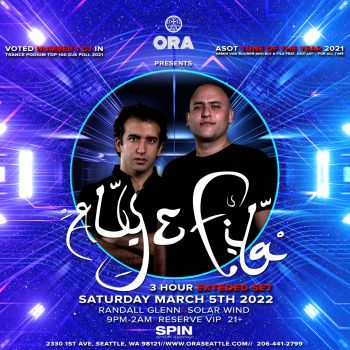 Videos
Event Details
Ora presents Aly & Fila (3 hour set)
Aly & Fila were Voted Number 1 Trance DJ in the 'Trance Podium Top 100 DJ Awards' for the 2nd year in a row.
Date: March 5, 2022
Time: 9pm-2am
Local support: Randall Glenn
---------------------------------
Aly & Fila
---------------------------------
As hot as the Sahara and standing every bit as tall as pyramids, they’re the single most successful group to have emerged from the spiritual lands of Egypt. From the Med to the Red and from up high in Cairo, to down deep in the Sinai, they’ve built an immense, ultra-loyal in-country following, From that foothold turntable Shamans, Aly Amr Fathalah and Fadi Wassef Naguib went global.
For over a decade their spirited take on the trance sound has captured the hearts, minds and imaginations of planet trance. With their whip-smart productions and sandstorm sonics, their performances have raised the bar at some of the world’s most recognized clubs. Comparably they’ve also ruled at EDM’s biggest festivals – EDC - Las Vegas, Tomorrowland, Global Gathering, Dance Valley, Creamfields, Ultra Music Festival. Continuing in a long tradition of playing the world’s most established and respected stages.
2014 was a very successful year for Aly & Fila. That summer saw the release of their Third Artist Album titled ‘ The Other Shore’ with three singles off the album being released in 2014 including ‘For All Time feat Jaren’ , Eye 2 Eye with Roger Shah and Sylvia Tosun and ‘Running with Sky Patrol and Sue McLaren’. Also released in Early 2014 was the the Remix Album of their artist album Quiet Storm. This Year also saw Aly & Fila Mixing the legendary Trance Nation Compilation released by Ministry of Sound.
With several Dj Poll Results in 2014 which saw Aly & Fila Voted No.28 in The DJ Mag Top 100 , Voted No.1 in the Trance Podium Top 100 DJ Poll , Voted No.1 DJ in the Middle Eastern Music Awards, Nominated in the Best Trance DJ Category in the Ibiza DJ Awards, Voted No.5 in the Magnetic Magazine Top 100 DJ Poll.
2015 was a busy year with two Albums . Aly & Fila – The Chill Out Album and the second released in summer of 2015 was Future Sound of Egypt Volume 3 Compilation. They also released their the single ‘Shine’ with Roxanne Emery , The Other Shore with Aruna and the FSOE 400 Anthem with Omar Sherif and Jonathan Carvajal.
With 10 FSOE 400 Celebrations announced all over the world that year there was exciting times ahead for Aly & Fila and their fans worldwide. The pinnacle of the shows was Aly & Fila proudly hosted FSOE 400 Celebration at the Great Pyramids in Giza , Egypt. Which took place in September 2015. The FSOE 400 Tour also coincided in a FSOE 400 Compilation being released.
Also announced in July 2015 is that Aly & Fila for the 2nd Year in a Row have been Voted No.1 Trance DJ in the World in the Trance Podium Top 100 DJ Poll of 2015.
Aly & Fila were Voted Number 1 Trance DJ in the 'Trance Podium Top 100 DJ Awards' for the 2nd year in a row.
General Terms